Yesterday there was a dragon in the sky. Seriously. It was up there, right next to the fluffy white flying pig with the small bum. Just ask my daughters, they’ll tell you. We all saw it as we sat on a park bench munching potato chips and getting brain freeze from our Slurpees. We also spied a mermaid, two dancing insects and a replica of our little dog Jack.

You have to spend a little time if you want to see dragons, what with them being shy, secretive creatures. Pigs with tiny heinies are rarer still.

Lately I haven’t had room in my schedule for dragon hunting, but then neither have you, I suppose. The theory is that the same hours are given to each of us, daily. Given that truth, it would be more accurate to say that I haven’t spent much of my time looking up. Sometimes life dictates the direction of our attention. Recent events such as funerals, board meetings, friends’ health concerns and career changes have set my eyes more or less horizontally. Some details have absolutely demanded my involvement, and for the most part I’ve been glad to be included.

But horizontal vision too long held becomes short-sighted, and to find magical beasts you have to look to the distance, and up.

Some people would say that it wasn’t a dragon that I saw, but a simple cloud. Perhaps they are correct, but it’s a rare cloud that produces wonder and joy just by the seeing of it. As I sat there yesterday looking up, I was reminded that the cares that burden my soul and bend my shoulders are not worrisome to dragons or gods. They carry on regardless.

Well, says I, actually “God”, singular. I’m a monotheist, which means while my imagination can conjure scaly winged beasts, my worldview holds that there is one God who is over all. He is full of mystery, but not secretive. Transcendent, and closer than a heartbeat.

Seeing the dragon was nice. Reclaiming the perspective that God is not far off? That he is willing to share my burdens, and still has time to tame dragons? That was priceless.

Even as I write this I’m mentally and emotionally exhausted, but there are clouds in the sky and I may be able to carve out a moment to look heavenward. There’s no telling what I’ll see, if I’ve got the heart-eyes for it.

“The heavens declare the glory of God,
and the skvy above proclaims his handiwork.” Psalm 19:1 ESV 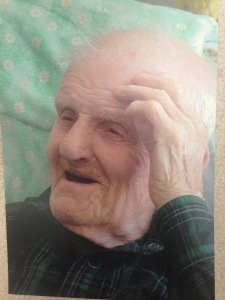 Before you’d gone there were a thousand goodbyes
Each it’s own colour, shape and size.
Most before the old worn chair,
In both clear loud voice and silent prayer.

Before you’d gone there were a hundred goodbyes
When I’d look into your kind blind eyes
And thank you for my parentage
And a Christian blue collar heritage.

Before you’d gone there were a few goodbyes
When the dark angel thought it yet unwise
To get too close to that walking cane,
Knowing with your firm grip it promised pain.

So as you go, here’s one thousand and one:
Let heaven welcome this stout Welsh son!
At one hand your Jesus, at the other your wife,
With straight back and bright eyes, run to new life!

I love you, Grandpa. See you soon, but not yet.

There is a safe space provided by friends and family who understand the pain and heartache of life in general, and the Way of the Cross in particular. I wrote this poem in thanks to God, for the benevolence showered on me by their presence in my life.

If you have ever allowed me to share in your angst, this is for you. I love you. Thank you for your vulnerability. When you need it, may you find peace and rest under the Healing Trees.

For those of you on mobile devices who find the picture too small, here is the text:

Heaven has hills where trees do grow
When desperate prayers are sown below.
Alas we rarely tarry there
In forests angels long to know.

There the Gardener takes a knee,
And one by one tends each small plea
With hands that still bear sacred scars,
Bringing to life a Healing Tree.

Covered there from the storms you fear,
Sheltered ‘neath leaves of answered prayer,
A sapling from your own pain grows
Near streams that flow with grace to spare.

Someday others will rest and hide
Under great branches tall and wide
Where the Gard’ner watered a seed
Shaped like that lonely tear you cried.